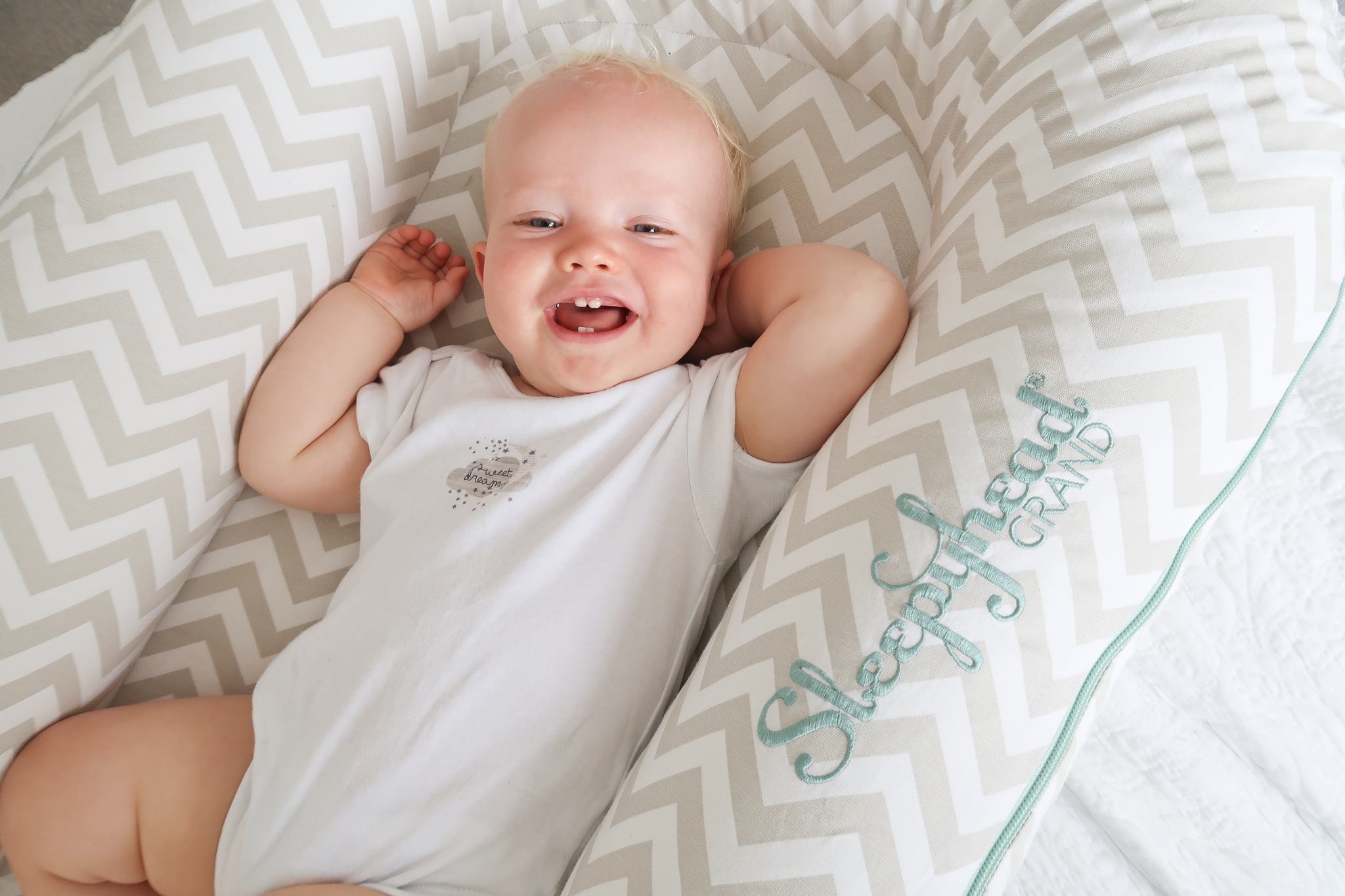 Sleep is hot topic among us parents, isn’t it? I’m pretty sure every parent has struggled with their child’s sleep at some point. Whether that’s just a difficult sleep regression or some harder, ongoing problems. I remember writing a post all about Darcie’s sleep when she was a baby, she was definitely a ‘below average’ sleeper and that’s putting it nicely! When Ernie was born he slept very well, so well in fact that I became almost quite smug about it. I felt like the universe had put me through my paces with sleep from my first child and now it was giving me a break – a child that slept! He was the total opposite to Darcie, perfectly happy to sleep in his Moses basket away from me and only woke once or twice a night for a feed, right from the word go. For the first four months of his life I would proudly tell anyone who would listen all about my amazing little sleeper, until that is, he stopped. My old friend the four month sleep regression clearly remembered how much fun we had had together the first time and decided to go in again for round two. Ernie was still happy enough to sleep in his own bed but not for any good length of time at all. The night feeds became more and more frequent and he would never wake up happy anymore as he had obviously woken before his body needed to. Slowly but surely I drifted into the life I knew so well of sleepless nights, and snappy, irritated days.

I’d never had a Sleepyhead for either of my children as newborns, not for any particular reason but I think I was quite sceptical as to whether of not they would help. I felt like they would either sleep well or they wouldn’t and there probably wasn’t much I could do about it. However, I have friends who rave about the Sleepyhead, and over time curiosity got the better of me. When Ernie was around 11 months an opportunity arose to review the Sleepyhead Grand and I would have been a fool to turn it down. Still quite sceptical about the whole thing I eagerly waited for it’s arrival.

When my good friend the delivery man turned up with the Sleepyhead Grand on my doorstep, I was initially surprised by how big it is. I suppose I have mostly seen photos of the much smaller newborn size, so in comparison the box was huge which shouldn’t really have been a surprise to me (I was very sleep deprived – that’s my excuse!). The Sleepyhead Grand is for children aged 9-36 months which is amazing as it should see Ernie right through from cot to toddler bed. I’m anticipating a much smoother transition this time around as the Sleepyhead will remain a constant comfort to him throughout that time. Anyway, back to this gigantic box in my lounge. Inside the box the Sleepyhead comes in its own zipped bag which is handy if you plan on transporting it from one place to another. It also comes with a cardboard insert that you remove but can put back in again to help keep it’s shape in transit.

My initial impressions of the Sleepyhead were just how lovely and soft it was. The padding is firm enough to keep it’s shape but also really soft. I immediately had a good feeling that Ernie was going to be a lot comfier sleeping in this than he was just on his cot mattress. I was (and still am!) really happy with my choice of the ‘Silver Linings’ cover which is a gorgeous grey and white chevron print with the Sleepyhead logo in a beautiful bright blue colour. It suits his room perfectly and will also continue to match with any changes we might make over the next few years as they are such versatile colours. I noticed how soft the material was but also how sturdy and durable it felt, which is what you want really with a fabric product that will last a few years. I’ve had a few questions on Instagram about it’s suitability for travel. It does come with the cardboard insert and also the protective bag that would help with travelling. You would just need to take into consideration the size and weight of the Grand, if you’re tight for space it wouldn’t be the easiest item to bring with you, but it would be more convenient than bringing a travel cot.

So, how did he sleep?

I’ll be honest when I agreed to do this review, I was a bit scared about this bit. I really, really wanted the Sleepyhead to help, not just so that I could get a bit more sleep, but also so that I would be able to write a good review! And I’m pleased to say it hasn’t dissapointed! I’m going to be a hundred percent honest here, Ernie still doesn’t sleep through the night, he still wakes for feeds and he still sometimes resists bedtime. However, the feeds have gone from five or six a night to anywhere between one on a good night and three on a bad one. He actually wakes up happy now too! This is a huge relief for me it’s so awful to have a chi;d that always wakes up miserable from a bad night’s sleep, having woken before they were ready. I have a feeling that Ernie used to wake himself up by rolling into, or hitting, the bars of his cot. So now he has the walls of the Sleepyhead cocooning him in that doesn’t happen. He’s truly a different child now he’s getting better sleep. He’s always been a joy to be around and his temperament is naturally very chilled and content, but I can just tell he is happier now, better rested. They say that sleep breeds sleep, so we are now in an upwards cycle of him sleeping better and better all the time.

It wasn’t an overnight change, and to be honest the first night I put him in the Sleepyhead he wasn’t that keen. He wasn’t used to the feeling of being cocooned and it definitely threw him at first. However, by nap time the next day he had the longest and best nap that I’ve ever known him to have since he was a newborn. He slept for four hours and woke up happy and chatty, a total contrast and welcome change to the cries I was used to hearing through the monitor. Ernie has been using the Sleepyhead Grand for six weeks now and over that time his sleep has gone from strength to strength. We’ve even made some progress with him self soothing recently which I’m sure is partly down to the comfort and reassurance the Sleepyhead gives him. We are now at a point with Ernie’s sleep where he will wake a couple of times in the evening (before approximately midnight) and then will generally sleep through from midnight to 6am, a vast improvement on what he was doing before. As I tend to go to bed quite late anyway it means my sleep is for the most part uninterrupted. We still have bad nights but that’s totally normal and doesn’t bother me as we are doing so much better in general now.

Would I recommend the Sleepyhead Grand?

So to conclude, yes I would recommend the Sleepyhead Grand, but don’t expect an overnight miracle. As I have explained, Ernie’s sleep has improved overall but we still have more battles to face. I’m hoping that we make some real progress with him settling himself to sleep soon and also that we might be able to drop feeds in the night. I’m going to let him do it all at his own pace but just gently encourage him in the right direction, as I do with most aspects of parenting. Those are our own sleep ‘issues’ but aside from those I’m positive that his quality of sleep and also his appreciation for it has greatly improved since we began using the Sleepyhead Grand.

Sleepyheads are currently being used at a few hospitals around the UK including The Whittington in North London. Their spokesperson has said this – ‘We care for some very unwell babies and the Sleepyheads provide much needed comfort, some of them will only sleep and settle in their Sleepyheads. The parents have been wowed by their comforting powers. The fact that they are machine washable, and harmful substance free is amazing. When the Sleepyhead pod is sitting in our rather large uncomforting hospital cot the baby is cosy and supported highlighting some of the benefits of the sleepyhead. The babies simply love them!’

On Your First Birthday

Oh hi there! I'm Hanna, mum to two under three, blogging my way through the highs and lows of Motherhood. I'm all about building up other mums, sharing the love and spreading a bit of positivity.